The ASA National Championships in Somerset - 1939

The following notice was circulated to Clubs throughout England in spring 1939:

“The festival has been fixed for Tuesday 11th July to Friday 14th July and needs four days of real summer to make it an outstanding event.

Competitors should note that entries will close on 10th June one month before the event and should be sent to Mrs Harold E Fern, Springhaven, Barnet, Herts.

A lot of people are making Minehead their holiday resort this year. It has a delightful bathing pool, 165ft long and 60ft wide. It is graduated in depth from 3ft to 15ft with modern diving stages and a sun bathing enclosure where one can 'brown' in a very short space of time. Dressing accommodation is provided for at least 500 people. There are footbaths and fresh water showers to rinse the sea-water from hair and skin and after getting dressed a café is at hand for refreshments. In fact without being the largest bathing pool in England at present, Minehead is surely one of the most up to date.

The resort is not a 'Blackpool' in its infinite amusements, but rather, caters for those who wish to relax where solitude and rest and quiet are available - either amongst its delightful surroundings, or by pleasant trips by horse or motor- vehicle. The gala arrangements are well in hand. Major J J Astor MP is to attend the opening ceremony.”

The following report was 'gleaned' from the columns of the local newspaper with the assistance of Minehead and West Somerset District Swimming Club:

Nearly 300 competitors from all parts of this country plus Australia, S.Africa & Czecho-Slovakia attended this event.

"The Western area of the ASA is the last of the 5 districts in which the centralised championships have been held, and although the scheme was opposed some years ago, and by the Western body itself, it is now generally accepted as having been a step in the right direction.

The Championship came to Minehead largely through the influence of the owner of the pool Mr Geoffiey Luttrell, backed up by Minehead Swimming Club and other organisations and private residents in the town with a public-spirited inclination.

It is worth noting with pride that Minehead paid not far short of £550 to get the championships here - a bigger sum than has ever before been offered, even by the Wembley authorities - and it is hoped that the enterprise and initiative thus shown will receive its due reward.

As to the pool itself it has in all respects, according to the views of the experts, every advantage for such a meeting. Sheltered, but providing a good light; of a nice width to permit the maximum number in heats at the same time; of a good length by which unnecessary turns are obviated; and with what is known as a fast water which has the additional recommendation of being warmed, it is exceptionally well placed for such a meeting, testimony to which appears to be afforded by the fact that the entries constituted a record for the centralised event."

"As a social climax to the National Championship meeting the dinner held on the Friday night, at which the placed competitors and officials were entertained, was a very successful affair. The Strand Café was the venue for the function and the company numbered nearly 200. The Minehead Urban Council (who made a grant of £25.00 from their entertainment fund towards the cost) and Minehead Swimming Club were the joint hosts, and Mr Geoffrey Luttrell, as president of Somerset ASA and of Minehead SC occupied the chair and presented the awards to the winning competitors."

Plunging "where competitors had to plunge against the wind and rather Choppy water so distances were not good."

Water Polo match between Somerset Constabulary and Bristol, 3 goals each.

“A 20 minutes display of diving and fancy swimming by that talented Taunton combination, the Water Babies, who performed under the direction of their instructor, Mrs Habe. The girls, who are quite junior, were given round after round of applause and had the distinction of being commented upon very favourable over the radio (nearly 3/4 hour of the proceedings were broadcast). Those who took part were Myra and Sheila Reed, Betty Nicks, Joyce Harvey, Mary Gould and Pat Baggs." 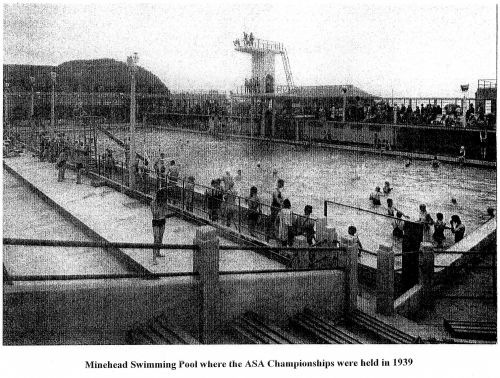