You are here:   Home > Your Sports >
Water Polo

Swim England has published specific guidance for water polo clubs (v2 on 27 Oct) which includes guidelines on social distancing during breaks and post-game, use of equipment, advice for match officials and coaches, injury treatment plus information for spectators.

Dear Club Secretaries and Referees, following the Government's announcement today, and announcements from Swim England and Swim Wales, we inform you the Officers of the Management Committee's decision to suspend all fixtures of the BWWPL with immediate effect.

This discipline of our sport is co-ordinated at Regional level. The current County Water Polo Secretary is Mike Coles.

Swim England is aiming to double the number of registered water polo players in the next five years as part of its new strategy to develop the sport.

On 29 Apr 2020, the National Governing Body’s Water Polo Leadership Group published the comprehensive Swim England Water Polo Strategy 2020-2025, which details a number of targets to help the sport grow. It has been developed following months of consultations with players, officials, volunteers and sports administrators. Please ensure the strategy is circulated as widely as possible.

Coming up in the near future will be a proposed Coaches Forum for the region, hosted by Sean King. And also in the pipeline will be an online referees' course and table officials course. Details of these courses will follow shortly.

Please note the deadline to prepare for Swim England Stronger Affiliation has passed to enable Clubs to reaffiliate in 2021.

Applications open to be one of five different state schools to receive £500 funding. View details.

Read about the development initiative which includes the Swim&Play Ball manual as well as complementary video material that provides basic knowledge for water polo instructors in order to assist them introducing the discipline to children aged between 7–9 who can already swim, those new to the sport, or beginners regardless of age.

Developed working closely with recognised water polo experts, the consists of four modules which are free of charge for participants:

Applications were previously open until 5pm on Monday 24 February 2020 for water polo clubs to apply to Swim England for funding  to pay for equipment, coaching fees or hire additional pool space.in order to help encourage new players into the sport. View details.

Within Somerset ASA's 2019/20 Development budget, a funding pot of £2,500 focused on encouraging more participation in the disciplines of Open Water, Water Polo, Synchronised Swimming and Masters. Somerset ASA's Development monies helped Taunton Deane to fund the purchase of an electronic scoreboard which will be in use  in club matches from the start of the September 2019 season.

We publicised an opportunity for you to have your say and help shape the future of water polo at a regional meeting held on 10 December 2019 in Swim England South West's Office. View summary.

We publicised a Swim England Water Polo Management Group consultation with water polo members to understand what changes can be made to the current junior competition structure. Its aim is to ensure the needs of the community are met and that the right environment is provided for our junior water polo players to develop to their full potential while enjoying themselves. After analysing survey results, recommendations will come into force next season.

The South West Water Polo Academy aims to promote, train and support junior water polo players throughout the South West in an attempt to advance their participation in the sport. Traditionally players who have represented their county at the various age groups were invited to attend the Academy to further their skills and attempt selection to the South West Regional team which play at Inter-Regional events. Additionally, some of the stronger players in the Regional Academies may get recommended to the National Academy.

The Academy will continue to hold seven sessions a year at Millfield School. The two-hour sessions will run for boys and girls (separate sessions with some cross-training) in two different age categories.

The two-hour sessions are normally set at a higher standard than normal club sessions.  However, in 2021 the early session will also now accommodate a development session so that more of the region's players can attend.

View update with invite for new players and earlier announcement with key information and dates.

Players born 2004 born took part in a National Academy training camp in Eger Hungary from 16 to 23 August. The National Academy camp for 2003 born boys took place from 30 August to 1 September in Manchester

Pool booked for 31 October and 1 November 2020 at Millfield. Further info to follow.

We had to make the unfortunate decision not to enter any junior teams into the 2019 Inter-County competition. The rationale after consultation with coaches from Weston-super-Mare / Frome and Yeovil was that Taunton Deane is currently the only team in Somerset with a viable Junior or Ladies waterpolo section. And while our other clubs are working hard to resolve this, it was considered unfair to enter a club team from Taunton to play against very strong opposition from other south west counties with 2/3/4 clubs from which to pick their best players as it would be to the detriment of those children playing.

U13 players in Somerset were invited to attend a training session in Taunton on Sunday 8 September 2019 so we can get children from our clubs playing together. 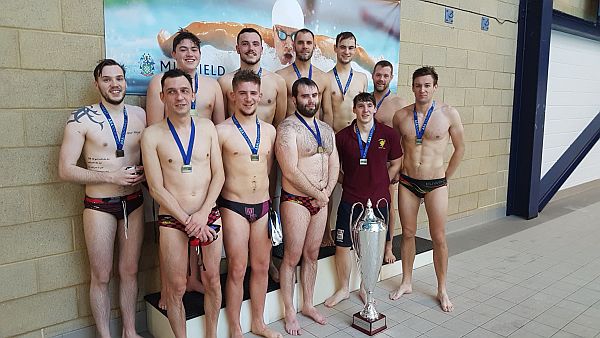 Unfortunately Gloucestershire pulled out of the Senior Men's 2019 competition prior to the weekend, leaving just Devon, Somerset and Dorset to complete, but the lengths of the games were increased so that teams did not lose out. The Somerset team, captained by Brad Poole of Frome, and coached by Nick Purslow of Weston-super-Mare beat Dorset 8-3 in their opening match, but lost to Devon 15-10 in the final, after Devon beat Dorset 10-8.

Somerset did not enter a team into the Nov 2019 the Senior Female Championships. Taunton Ladies did represent Somerset in the tournament at Millfield on 14 Jan 2018, losing to Devon and Gloucester but showing plenty of promise for a developing side (view Senior Females report).

Somerset lost to Devon and by one goal margin to both Dorset and Wiltshire in the 2018 U14 Mixed Championships at Millfield on 24/25 Nov 2018. All six south west Counties were also represented In the 14 Jan 2018 tournament, Somerset lost 12-4 to Cornwall in the 5th-6th place play-off (view U14 Mixed report).

All six south west Counties were represented in the U12 Mixed Championships over 24/25 November 2018. Somerset players showed promise (view results). They did have a win to celebrate in 2017 over Wiltshire and we were narrowly defeated by Dorset. (view U12 Mixed report.).

Well done to all players and staff and a big thank you to all officials for supporting the 2019 tournaments.

All Somerset clubs with senior Men's teams (the University of Bath, Frome, Taunton Deane, Weston-super-Mare and Yeovil) are invited each year.

Our County tournament will be held in September 2020, at Millfield, and we hope to see all five local teams competing.

Frome won the 2019  tournament held on 21 September at Millfield beating 2018 champions Weston-super-Mare in the final game. Taunton were the other senior team competing but were beaten by both Weston and Frome. The shield was presented by County President, Kelly Podbury to the winning team. View report.

We publicised an opportunity for water polo clubs to apply to Swim England for funding  to pay for equipment, coaching fees or hire additional pool space.in order to help encourage new players into the sport. View details

Thanks to 2019 Start Water Polo funding, a Swim England programme designed to increase the number of young water polo players in club structures, Weston-super-Mare SC will be taking their passion for coaching and playing water polo to new levels.

City of Bristol, Yeovil Spartans, Taunton Deane and Weston-super-Mare.were among seven successful south west bids from the 2018 programme. Taunton Deane used START funding to purchase smaller 3/4 size goals to promote U13s water polo. This was successful and the Club has increased the number of children playing in this age category from about 5 to 20!

Taunton Deane has an open taster policy so anyone can come along and take part in taster sessions any Sunday at 5pm (timing is age dependent). Contact Simon Tomlinson (tomlinsons1@sky.com) for details.

We publicised the opportunity for athletes aged 8 to 14 years to try synchronised swimming and water polo activities with some of the top Team Bath and GBR full-time athletes and coaches in these sports at the national level. The #MinorityChallenge Half-Term Camp was held on 19 May 2019 at University of Bath Sports Training Village. View details.

Day 2 of the Easter Camp. These are the winner of the EGGbeater competition pic.twitter.com/G5yxLbbTqc

Frome, Taunton Deane and Weston-super-Mare are considering the formation of probably one of the first Network Water Polo Clubs in England, by combining all the Somerset clubs together to form Somerset Titans Water Polo Network.

As well as providing an opportunity for Club senior sides to come together and complete in a water polo tournament to be held in a deep water pool, it could give a springboard for the seniors to enter the British Water Polo League as Somerset Titans, and enable young players to compete at the highest level.Frome, Taunton Deane and Weston-super-Mare are considering the formation of probably one of the first Network Water Polo Clubs in England, by combining all the Somerset clubs together to form Somerset Titans Water Polo Network.

Blended learning opportunities are  designed to develop the knowledge, skills and abilities needed to take your first steps into coaching. The Water Polo Assistant Coach course is  suitable for anyone interested in supporting a Water Polo coach in a club environment.

We congratulated Somerset coaches on their appointments:

Simon Tomlinson (Taunton Deane) applied to become a water polo tutor, something Somerset and the South West badly need and in view of this and his national commitments, Simon has stood down as County Coach with our thanks.

Simon  hopes to fulfil his ‘passion’ for water polo after being selected for UK Coaching’s Performance Foundation Coach Support Programme in 2019. Read more.

Swim England is inviting applications for new officials to boost water polo structure. View opportunities and next steps for referees and table officials.

A free table officials resource aims to recruit new water polo volunteers. There is no presenter so the resource can be completed at the pace of the participant and as many times as required. View details.

All officials courses were delayed in Jan 19 whilst the new FINA rules were considered.

The History of Water Polo in the County has been recorded in pictorial form by Mike Coles – view slideshow or contact him for a unique way to see how the sport is featured.