A massive well-done to Chris Metcalfe who been announced on the first day of Volunteers' Week as the region's Volunteer of the Month for June 2018.

Chris' role started with Keynsham Amateur Swimming Club around 2012. He plays a significant part in the club's daily life and sustainability.

Every club needs volunteers like Chris who will get on with a job and also be inventive and push the boundaries. He will never let you down and his giving to swimming cannot be under estimated.

As a Keynsham volunteer, Chris helps run and organise the prelim galas, the club captain's gala and club championships (which run over several weekends and a huge undertaking) plus celebrations for the club. He also helps organise their biathlon events and Run-Shoot events with Bath Pentathlon. 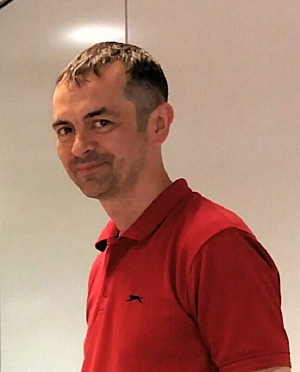 Communication is key in a club and Chris sends club emails about events, courses and training, open meets and Arena league to all their members. When sending information he always sounds happy to receive questions and adds that he can help if necessary, especially to newer members about submitting swimmer entries to competitions.

In his workforce co-ordinator role Chris ensures that volunteers can access the right training and continues to improve the development of the club by recruiting new volunteers.

Keynsham always have several Young Volunteers in the SW regional programme through Somerset ASA and Chris co-ordinates their programme and volunteering. This is one reason why Keynsham have so many young people helping at the club.

There shouldn’t be any more time for Chris to give but somehow he also helped organise the Wellsway School team in the Bristol Secondary School Sprint Galas giving up 4 evenings between October and November 2017 and then gave more time for  the Bristol Primary Schools Galas in March and April 2018.

Chris is part of City of Bristol Aquatics and Assistant Finance Officer for swimming as well as assisting with disability swimming galas held at Horfield.

John Warren, the Chair of KASC commented “Chris Metcalfe has been an invaluable helper at Keynsham Swimming Club. I don’t know how he finds the time to do all the things he does. He has been and remains key to co-ordinating Galas and has also arranged a number of Galas on behalf of Keynsham, Bristol School and City of Bristol, which helps develop Keynshams profile with the Network of local clubs.

"We have had a number of meetings on the future development of Keynsham Swimming Club and Chris is instrumental in these talks and has been a steadying influence.  Not only does Chris offer help to the future of the club, he is also central in ensuring our volunteers have the correct qualifications and will be the one who organises workshops.

"He does not just work in the background, but has also recently qualified as a referee and is often seen at Galas, not just Keynsham’s.  Chris is not just working away on emails and in meetings, away from the swimmers, he is very visible and works tirelessly in helping with the development of our swimmers.

"Keynsham would struggle to replace him and I don’t know many other people who would be sending and following up emails at 1am in the morning. We all believe he is very deserving of recognition.”

Team Manager Presenter
Chris is one of the very few Team Manager 1 module presenters in the SW region. He has run several courses for the Team Bath AS network which have been opened out to Somerset, Wiltshire and Gloucestershire volunteers.  Over the last 2 years he has been part of three courses for us (two of them alongside Fiona Bowen as his trainer and assessor). The impact for clubs of having trained team managers is immense, enabling them to attend events and competitions.

Referee’
One of only 5 candidates from Somerset that took the referee exam in 2017, Chris achieved the very challenging 80% passmark. As an official you will find him at most meets including Somerset Counties and events, development meets and he supports both Team Bath AS and COB aquatics licensed meets. There are times when clubs have been looking for officials right up to the day of the event. The time he gives is very much appreciated by the swimmers, clubs and parents as without officials who are prepared to attend training and developing themselves there would be no events and no qualifying licenced level 1 events in the area. Besides his own development Chris ran a J1 course with 12 candidates from Somerset and Wiltshire clubs at the University of Bath. This included 2 workshops on 20 June and 4 July 2017 for the ‘Wear White Challenge’ and these trainees are currently qualified or been mentored.

Graham Cockill, Referee and British Swimming Referee Tutor plus Officials’ Secretary for Somerset and SW regional board representative was pleased to support the nomination stating ‘Chris first qualified as a swimming official in March 2013, and since then has given unstintingly of his time to gain further qualifications.  He has recently passed the National Referee examination, supports swimming meets at all levels, and recruits parents to undertake officials’ training.

"Chris is a fine example of the committed volunteer: he understands that the sport can only function if people ‘roll up their sleeves’ and get involved – and he certainly is fully committed and involved.  He also plans ahead. For example,  in thinking about the future needs of the club’s swimmers Chris constantly persuades parents to undertake officials’ training courses, some of which he conducts himself, and he successfully introduced a new long distance meet at which swimmers from across Somerset could achieve qualifying times for 800m and 1500m events. He volunteers to officiate at all County Championship and Development Meet events, as well as countless Open Meets and League galas.  He is a dedicated, popular, modest, friendly, enthusiastic, totally reliable and committed volunteer, and Keynsham SC and Somerset ASA are lucky to have him."

Fiona Bowen, Secretary of Somerset ASA agrees with Graham about Chris’ invaluable help to the County and also wished to highlight Chris’ character and why he is great for aquatics within the area: "The only thing I would like to add is that Chris always provides his services and help without fuss or fanfare.  Many people may not realise the amount that Chris does because of his unassuming manner but his contribution to practically every aspect of volunteering has had a massive impact on what the County can offer."

Although this nomination came from Team Bath AS it is fair to say that Chris has a massive impact on aquatics clubs and people throughout the swimming community. He is an inspiration to volunteers, constantly providing excellent support for others and deserves this nomination.

Join In, part of the Sport and Recreation Alliance has used the latest valuation techniques in the economics of wellbeing to reveal that one volunteer in sport creates wellbeing worth £16,032, for themselves and for those they help play sport. As Chris covers many roles he is undervalued in this estimate. These volunteers are called ‘Hidden Diamonds’ and like Team Bath AS we believe this is what Chris is our sport.