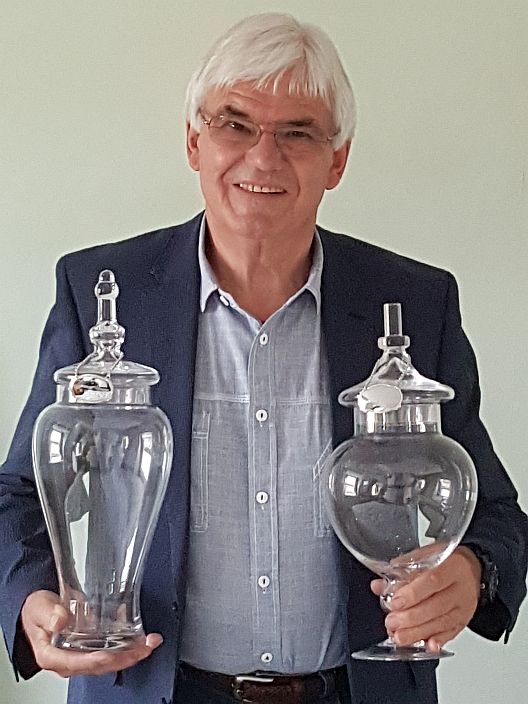 From Swim England South West: "35 years of service to aquatics, probably around an absolute minimum of 10,000 hours of time (and this probably a large underestimate) devoted to the club, county, region and country for free.  If this had been paid work at just £5 an hour that's £50,000.

This is the least that Ray Warren has given in service to aquatics over 35 years in financial terms, but of course his worth is so much more than that.

Ray started helping at his local club Frome Swimming Club where he coached at weekends and helped out with Grade nights.  He was to be seen regularly on poolside, helping out at any opportunity when needed and has done so until only very recently.

In addition, he trained as an official and worked his way through the stages to referee.  He was a regular referee for club events as well as the County Championships and Regional Championships for many, many years, has officiated at National events and has tutored many new officials over the years. His calm and undemanding demeanour meant he was always a popular referee with swimmers, team managers and coaches alike, confident in the knowledge that the event was in good and fair hands.  It was Ray who refereed Frome's first Open Meet in 2000, supporting and advising the club as they took on this major venture.

Ray has been a stalwart of the club for countless years.  Like all clubs, they have had their ups and downs, but through it all they could rely on Ray to quietly get on with what was required and provide expertise, continuity, common sense and massive support week on week.

The club recognised Ray in 1987 when they made him President of the club and later made him a Life Member. He has also been Treasurer for Somerset ASA for 25 years this year.  An occasion which the County will celebrate with pride as Ray has overseen the County's finances with incredible attention to detail, keeping the accounts in check and above all always making sure that any surplus was invested back into the County for the benefit of members and swimmers through Development initiatives. He has always been mindful that the swimmers should be the ones who benefit from well spent investment. With Ray's expert guidance on the financial side, the County has become well known for providing opportunities for members, being proactive and open-minded when new and innovative opportunities present themselves.

In 2010 Somerset ASA's Management Committee were honoured to be one of 103 UK volunteering groups to receive the Queen's Award for Voluntary Service with Ray's contribution as Treasurer being a vital component of this Award.  Ray was an obvious choice to represent the Management Committee as he joined three other members of the Committee at a Garden Party at Buckingham Palace in June of that year where he was presented to His Royal Highness Prince Michael of Kent.

Ray has been recognised by the County over the years in a variety of ways.  In 1996 he was made President and five years later, in 2001, he was presented with the Wyvern Plate, an award made to members for outstanding service to the County over several years.  He has also been made a Life Member of the Association.

Whilst never expecting recognition or reward himself, Ray is always one of the first to thank and recognise others.  He has given, and continues to give, his time freely and without complaint.  The County has seen strong and stable finances during his time as Treasurer, his club continue to look to him for support and advice and aquatics have benefitted from his quiet and unassuming contribution over the past 35 years.

Now is the time to recognise this gentle giant for the incredible contribution he has made, most of it in the background and without fuss.