Alyson Bashord (Head Coach) reports: "All the swimmers completed three figures on Friday 8 July and made up their own solos which took place on Saturday 9 July. They all did very well and are showing improvement each year.

"We welcomed Somerset ASA President Paul Sartain on Friday. He watched the figure section which contained back tuck somersaults, ballet legs and barracuda's and we hope he learned a bit about synchro!

"This was our final synchro session at St James Street Pool as it is closing after many years, with the new pool at Blackbrook opening shortly. Synchro will be moving to the Station Road pool which is deep enough for our needs as synchro needs deep water." 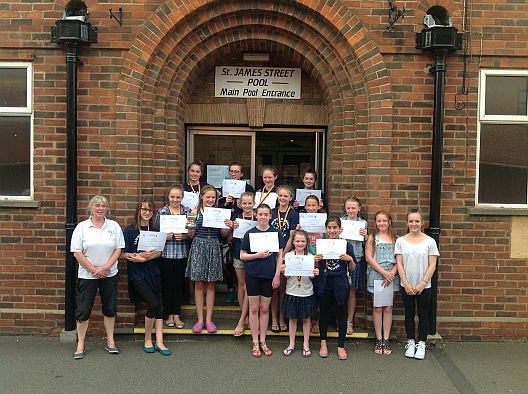 Photo for historical record - swimmers pictured outside the 1920s St James Pool before its closure on 10 July, probably to be demolished.

Junior trophy awarded to Nyah Tomlinson with score of: 99.4520

Senior Trophy awarded to Beatrice Wilkey with a score of 105.4384

Safeguarding - Guide to training and funding and dates for courses

Find out which courses will be funded by Somerset ASA and the Region and the process to follow when booking a Safeguarding course .

Sent to all our Clubs. Please sign up for a webinar!